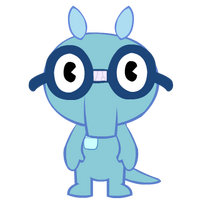 Sniffles is a light blue anteater who is the most intelligent character in the series. He usually likes reading and doing science and math problems. He has made lots of inventions, which usually lead to the death of himself and others. He also likes to eat ants, but the ants usually kill him in a sadistic manner.

Retrieved from "https://happytreefanon.fandom.com/wiki/Sniffles?oldid=370477"
Community content is available under CC-BY-SA unless otherwise noted.