Softy is a fan character.

Softy is a pink rabbit that wears a white shirt with a brown star on it. Among all pink characters, he is one of the few to be a male character.

Softy is considered to be rather friendly and polite to others. He is also shown to be constantly smiling at anyone. Sometimes, his smile can be rather disturbing. This is supported by the fact that he is mentally unstable. Because of this, there are times when he loses his sanity and ends up causing trouble, varying from simply acting stupid to scaring and threatening others. Unlike many mentally unstable characters, however, there is no certain trigger to his insanity. So, he can be insane in a sudden no matter the condition. His act of insanity does not last long, though. He will recover after some time, only for him to forget what he has done before.

He seems to be fond of harmonious furniture, as he keeps many of them in his house. There is even a poster of Buddhist Monkey in his bedroom, but it is still unclear whether he is actually a fan of him or not. 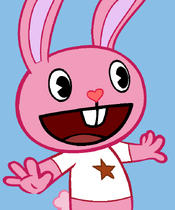 Retrieved from "https://happytreefanon.fandom.com/wiki/Softy?oldid=385423"
Community content is available under CC-BY-SA unless otherwise noted.