Start a Wiki
Sparkles is a HTFF character.

Sparkles is a purple bearcat with tons of glitter in her hair. She also wears a grey shirt with a diamond and rainbow, representing a light prism and by extension her bubbly personality.

Sparkles can be described as a personified ray of sunshine, which is ironic since she tends to be a night owl. She often carries around stickers that she likes to place on anything she sees as too dull. She also tends to use them in lieu of tape or band-aids, but with little good results. In a similar fashion, she has a habit of tossing glitter wherever she goes, causing distraction for others.

Sparkles loves everything cute, gushing over animals and becoming infatuated with boys. She can be overfriendly to an overbearing degree. If someone feels down, her solution is to - quite literally - brighten their day with one of her aforementioned paraphernalia, unwittingly annoying or even harming them as a result.

To a lesser extent, she has an interest in psychokinesis and fortune telling. At times she can be fooled into believing she has such powers.

But really, don't use stickers as band-aids. 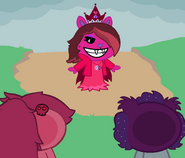 Add a photo to this gallery
Retrieved from "https://happytreefanon.fandom.com/wiki/Sparkles_(LOD)?oldid=391151"
Community content is available under CC-BY-SA unless otherwise noted.