Every little thing she does is magic.

Sunset is a character of HTFF.

Sunset is an alien former-princess of Generica. She moved to earth and lives with Raymond and Ell. She shares a strong bond with them, particularly Raymond. She's very protective of her twin sibling and will do anything to help them. She can be a little too over-protective and sometimes embarrasses them, and might get them killed on accident.

Sunset, being a fairy of sorts specializes in magic and loves to help others. Unfourtaley her magic is flawed. She has a tendency to think before she plans and never seems to think twice. She's also partly deaf (lacks a left ear) and doesn't have good eye vision. This doesn't stop her form teaching others (Paws is the main example) how to use magic like her.

In terms of her personal life, although born a chipmunk she feels she's more of a bug. She has animal instincts of both bugs and chipmunk and can act like both. (Example storing nuts in her checks, pollinating plants etc.) When she isn't with Raymond, she's either alone or hanging with other mutants (Oddity) or other magic users (Cascade).

Sunset is a purple chipmunk with butterfly wings. She wears black pants, blue shirt, and wears a tiara. She has a magic wand. She came from another planet due to not being mature enough and was forced to live with Raymond. Like Softy, she also never frowns due to some weird mental disorder. She is also really strong and is a tough fighter.

Sunset since then has been revived by a mutation. She now has a light greenish purple color, and she wears a skirt and a tank top over her torn out old clothes. Her wings are damaged but can still be used to fly. She has her brain exposed and has grey pupils. In addition to becoming a zombie, she is also an unknown bug as she has a stinger, an extra part of arms, and antenna, most likely caused by the toxic waste that mutated her. While she is still almost like her classic self, albeit being a zombie, she is extremely weaker.

In Flesh Princess, Sunset is injected with a potion that could revive the undead back into their living forms. Sunset is reverted from a zombie back to her normal form, but is still missing a portion of her head, which has been stitched up. Later at the end of the episode, she falls into a chemical-polluted lake and becomes part insect. Her creator soon confirmed the change was permanent.

Later on, Sunset sports tentacles, six arms, a new outfit (green alien t-shirt and blue dress) is completely blue, is glowing and has completely red eyes (with small dots), this form is also known as her God Form.

In The Garden of Raymond, Sunset would bury herself underground and undergo metamorphosis, resurfacing later in A New Kind of Odd. She now has purple-blue fur, green antennae tipped with stars, pink hair, pink eyes with star-shaped pupils, a blue dress, transparent wings and a stinger. 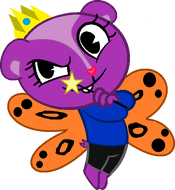 Retrieved from "https://happytreefanon.fandom.com/wiki/Sunset?oldid=387423"
Community content is available under CC-BY-SA unless otherwise noted.