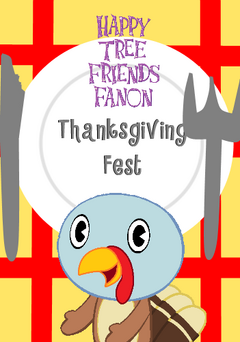 Thanksgiving Fest is an upcoming half-hour long special containing Thanksgiving-themed episodes of Happy Tree Friends Fanon. It will be shown on TV November 8, and will come out on DVD November 23, 2013.

All the episodes are shown on a plate with a fork and knife beside them. The episodes will be released on Mondo and YouTube in the first days of December.

Intros and summaries (DVD only)

Retrieved from "https://happytreefanon.fandom.com/wiki/Thanksgiving_Fest?oldid=331445"
Community content is available under CC-BY-SA unless otherwise noted.