The rat is a villain/gangster/spy in Happy Tree Town. He started his life in the town and it is said that he started his villian/gangster/spy career whith the HTF town mafia. He also has an enemy which is the secret agent The Mole and has a big empire. In his early years he worked in the underworld but in later years he created his own. He now spends his days trying to grab a mysterious suitcase. 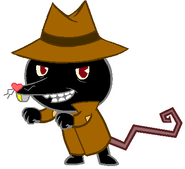 The Rat in normal HTF Form.

Add a photo to this gallery
Retrieved from "https://happytreefanon.fandom.com/wiki/The_Rat?oldid=135069"
Community content is available under CC-BY-SA unless otherwise noted.