Start a Wiki
Thirsty is a fan-made character of Happy Tree Friends fanon.

Thirsty is a blue fox who hence his name, often gets thirsty. He wears a gasmask with a water tank strapped on his back. He also wears a grey swimsuit possibly to prevent getting wet inside. He is a frequent victim of being pranked by Pranky because sometimes, Pranky would secretly switched the water tank with some other liquid substance in it (like beer). Thirsty will make his debut in Are ya Thirsty Pardner?.

His tail is badly fried up for unknown reasons. This may be a result of Pranky's antics, and is similar to how Russell and Handy do not regenerate their body parts.

When his tank runs out of water, he may resort to re-filling it, and can go through extreme measures to do so (such as stealing a hose from a baby). He also snitches on some occasions, but only for the safety of himself and others.

He is a somewhat awkward character, and is extremely unusual when compared to the other characters.An example of this is that he never takes off his gas mask or swimsuit, except when he is forced against his will. He seems to be slow, and is socially mixed.

Thirsty without his gas mask in April Showers 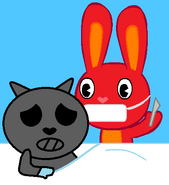 Add a photo to this gallery
Retrieved from "https://happytreefanon.fandom.com/wiki/Thirsty?oldid=380438"
Community content is available under CC-BY-SA unless otherwise noted.