She is blood, flesh and bones.
But not tucks or silicone.

Wiggles (A Bit Too Much of a Pickle)

Raylene: Expert Cover Girl
Thunder is a magenta coloured jackal, who wears a large puffy purple sweater, and has long blue pants. She is the youngest of her two siblings (Clesta and Arcus).

Growing up, Thunder was sheltered from the world she lives in, it wasn't until she finished college, is when she was forced to move to earth. (like her sister).

Thunder herself doesn't consider much of a hero, she mostly views herself as just an average person that just happens to know magic. She generally prefers to be alone, although often hands with her friend group a lot of the time.

At a young age, Thunder has been diagnosed with Aspergers' syndrome, because of this, she hates large crowds and hates loud noises, and is very sensitive to both of those things. It's also worthy of note how she got into an accident and as a result isn't the best flyer.

She's still skilled at magic, she mainly uses it for herself, but can use it on others (mainly if she's threatened.) She currently works at the town's Police Station.

Usually, Thunder feels grouchy, miserable, sarcastic, apathetic and pessimistic. It's very easy to annoy her. She has a hard time expressing her feelings. This is a problem as she feels like a huge pushover. (Such as doing people favors yet never speaking up). While she is a loner, there are times when she happily hangs with other people, and will for once actually have fun.

Thunder has a huge special insert in books, both fiction and non-fiction, she can literally go for hours expressing her love of one particular book alone. 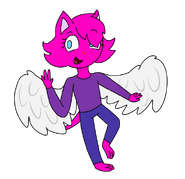 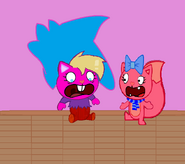 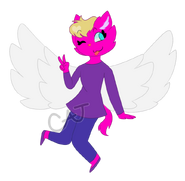 (I believe ConfusedandTired also drew this) 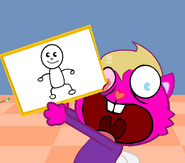 Add a photo to this gallery
Retrieved from "https://happytreefanon.fandom.com/wiki/Thunder_(YSK)?oldid=399892"
Community content is available under CC-BY-SA unless otherwise noted.