Just a horse liquid with a room temperature

Shape-shifting into another character, swimming, water

Tide is a character of HTFF and CCF. Tide is being nerfed currently for some reasons.

Tide is a blue hippocampus who is mostly seen at the watery area (oceans, lakes, rivers, etc.). His body is mostly covered with water and almost invulnerable. He can dodge any projectiles easily even if it hits his body since his body is mostly made out of water.

Some characters don't recognize him when he changed his shape into another character. The only way to recognize him is every time he changes his shape into another character, the pupils are always green instead of black. He can be a bit of an ego and arrogance about his ability, but quickly changing his mind when there's something relating to his weakness around, or being scolded(sometimes).

Since he's mostly made out of water, he can't take the heat for a long time and can easily evaporate if there's too much heat. He also has a big problem when interacting with some fire-related stuff even when he is in another shape. He might afraid of fire or having pyrophobia despite water might can put out the fire easily. He also weak to cold stuff and they might freeze him over. Tide mostly prefers place with a room temperature.

The main problems when it comes with changing into another character, he will be able to suffer bloody injuries and can die just like other normal characters get instead of just evaporating since he fully duplicates the character's trait that he sees. This will happen if he doesn't interact with water. If he does, he will quickly change his shape back to normal and avoid all bloody injuries. If he died during in other form, he turns back into the water form(just normal water).

In some episode, Tide will changes or shape-shifting into another form that he sees. This is list of forms that Tide had changes: 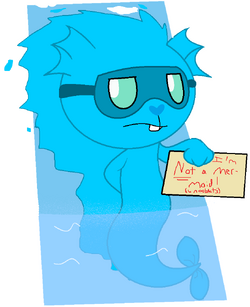 Retrieved from "https://happytreefanon.fandom.com/wiki/Tide?oldid=363230"
Community content is available under CC-BY-SA unless otherwise noted.