Tide Pod is a porpoise with blue and orange markings on his face and belly. His eyes are also those colors.

Tide Pod is known for having a tendency to swallow (or try to swallow) things that are inedible and often hazardous. A common reason for this is because he mistakes it for something delicious, or otherwise to show off. Unsurprisingly, this usually gets him ill and in need of medical help. 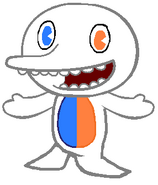 A terrible ref thing.
Add a photo to this gallery
Retrieved from "https://happytreefanon.fandom.com/wiki/Tide_Pod?oldid=380817"
Community content is available under CC-BY-SA unless otherwise noted.