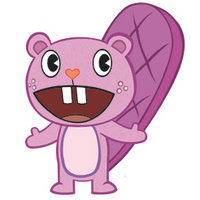 Toothy is a purple beaver with very wide-gapped teeth and freckles. He is generally a very friendly character, although at times he can be a bit rude. He usually acts before he thinks. He has a girlfriend who is a female beaver named Jussy. He also has an older brother named Timid.

Retrieved from "https://happytreefanon.fandom.com/wiki/Toothy?oldid=377421"
Community content is available under CC-BY-SA unless otherwise noted.