Trippy is a lime green bat with a star shaped fur spot on his head. Trippy is an adventurous, wild, energetic, upbeat, crazed, and silly tree friend with a big heart.

Trippy is a very friendly, energetic, and wild character but is somewhat dim-witted. He is always trying to get his friends involved in various activities, which usually gets him killed. He loves to be around other characters and hates to be alone. He will often be seen with others playing or doing any kind of fun activities.

Despite being a very friendly and caring character, Trippy shows little to no concern for others. Even ignoring others if he witnesses a death in front of him. He does still care very deeply for his friends, but he won't show any emotion once others die.

Trippy is an electric green colored bat with a dark green fur spot on his forehead. He is a regular sized tree friend being slightly shorter than Superspeed, but slightly taller than Robo Star. He has large green bat ears, large dark green wings, and a dark green belly.

In early concepts, he was shown having a light yellow/cream colored belly and having fangs instead of teeth. He was also shown to not have a regular pink and heart shaped nose, but rather a more realistic bat nose. His wings were originally under his arms, rather than being behind him.

Trippy has appeared in a large amount of episodes, irregular episodes, and breaks. To see the full list, click here.

Trippy is set to appear as one of the main characters featured in Happy Tree Friends Academy. In this spin-off, Trippy is in his anthro-anime (like the rest of the cast). His name has been changed to "Kibatsuna" (the word "Trippy" translated to Japanese). Trippy is a wild and rebellious sophomore with failing grades, but lots of friends. Trippy wears a over grown long sleeved green shirt, blue pants, and wears socks where ever he goes (he doesn't wear shoes by choice).

Trippy appears as a Neutral aligned character in the Ka-Pow! series, Bros to the Most. He is partnered with Hippy in this spin-off.

He is one of the main characters in Happy Tree Friends Fanon: Our World!. A series where all the characters are shown to be humans rather than animals. He's shown to be very perverted, wild, and energetic and shows deep affections for Foster. 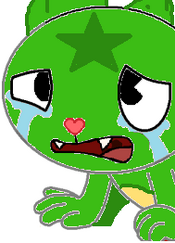 Retrieved from "https://happytreefanon.fandom.com/wiki/Trippy?oldid=376485"
Community content is available under CC-BY-SA unless otherwise noted.