Tromp is a fan character.

Tromp is a brown dog who wears a tattered shirt and trousers, worn out shoes and a tin can for a hat. He is portrayed as a hobo or a tramp. As a result, he sits by a fire from a barrel to keep warm. He also eats what hobos eat, which is canned food. He often plays a harmonica. Because of his hobo personality, he is often picked on by Jerky, Pierce, Naz and Bulky. 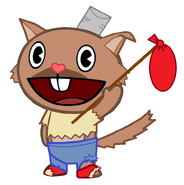 He was given a small loan of a million dollars

The power goes to his head.

Tromp trying to get out of the well.

Tromp trying to get out of the well.
Add a photo to this gallery
Retrieved from "https://happytreefanon.fandom.com/wiki/Tromp?oldid=388374"
Community content is available under CC-BY-SA unless otherwise noted.