Tromp the Vote is an episode of HTFF.

The episode starts with Leif scratching a lottery ticket, which turns out to be a winning one. Leif is so ecstatic with joy that he dances in the street and gets flattened by the Mole on a speeding moped. The ticket flies into the mouth of a sleeping Tromp. The hobo dog pulls it out and is completely surprised to find that his life is about to change. He walks into the nearest convenience store and places the ticket on the counter. Deb, who happens to be the cashier in disguise, congratulates the new winner and offers him a cheque.

Sometime later, Tromp purchases a mansion with a tennis court, pool and a host of other amenities. Deb is also spending quality time with him. The elections are announced and Deb coheres Tromp into running. Drawn in by the prospect of being powerful, Tromp agrees. Cut to city hall, where Tromp stands with his rival, Todd. Journalists and crowds also gather for the event. When Zee asks each of them about their proposals, Todd plans for a big statue of himself to be erected. The crowd is unsatisfied with him and someone even pelts him with a tomato.

Tromp is pressured to figure out what he would do with the power. Deb spots a bunch of mutants in the back row, Marus coughing up a hairball that develops legs. Repulsed, Deb whispers a plan to Tromp. Going along with it, he proposes to get rid of mutants, which apparently gains him votes. The mutant group is obviously distraught at this. Dexter follows up on the topic. Tromp reads through his papers, one of which is a travel brochure displaying the Great Wall of China, giving him the inspiration for his next move.

After Tromp is elected the new mayor, he is shown at the border with Deb, the journalists and a multitude of supporters and protesters, witnessing the construction of a large wall. At the other side are the mutants, displaced from their homes and sent out of town. Zet briefly arrives to drop off Biohazard, who was mistaken for a mutant. Ell and Sunset decide to form a mutant resistance in order to get back at the unscrupulous leader. Other mutants such as Oddity, Squag, Marus and Splice join in.

Sunset uses her magic to blast a hole through the wall. This destruction leads to many large bricks raining down, one crushing a police car with Zet and Samantha inside. Tromp wages war against the mutants. He calls the military for ammo. The general, Lumpy, happens to be at Tromp's mansion when he receives the call, turning to see an open safe filled with gold bricks. He soon arrives in an army tank and fires one of the gold bricks. Deb realizes this mistake and leaps to catch it, leading her to be smashed against the wall. Lumpy fires more bricks, killing Squag and Biohazard.

As the conflict occurs, Handy is seen a few miles away, building part of the wall right in the path of a toxic waste plant. Handy scowls at this inconvenience, accidentally swinging his wrecking ball into the plant and contaminating a river in doing so. Shocked, Handy flees the scene whistling innocently. Oddity scoops up water from the polluted river and shoots it from her blowhole. Amp is splashed, which leads to himself, Zee, Irin and Dexter being electrocuted and fused into a single mutant creature that puts a fearsome halt to the chaos by obliterating the wall with a zap. The crowd leaves in a panic, the mutants relish their victory and Tromp is left speechless.

The next day, Tromp is once again living on the streets. He finds out that the new electrical mutant was elected as his replacement, and is living it up in his former mansion with Ell, a big fan, wanting an autograph.

Build a wall and have the mutants pay for it? They don't think so. 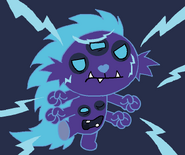 Amp, Zee, Irin and Dexter's electro-mutant fusion.
Add a photo to this gallery
Retrieved from "https://happytreefanon.fandom.com/wiki/Tromp_the_Vote?oldid=340184"
Community content is available under CC-BY-SA unless otherwise noted.