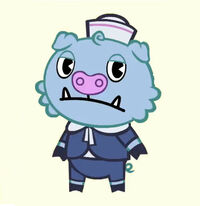 Truffles is a blue pig/boar who wasn't chosen to be the new main character in the Vote or Die character contest. He lost to Lammy and Mr. Pickles. But he still makes cameo appearances in some episodes.

While he hasn't been formally introduced, the creators have described him as a brat who is always trying to one up.

Retrieved from "https://happytreefanon.fandom.com/wiki/Truffles?oldid=292350"
Community content is available under CC-BY-SA unless otherwise noted.