Tweets is a fan-made character of HTFF.

Tweets is a blue bird who is missing his beak, though hides it by wearing a mask. He never speaks or makes audible sounds because of this. While his mask may be scary, the real reason to fear Tweets is because he tortures people, usually if they do something to hurt or annoy him.

Whenever he tortures other characters, he remains silent and calm through the entire thing. His torture methods often tend to be strange or unusual, but all the while slow and painful. In spite of his reputation, Tweets is actually a nice guy, but suffered a traumatic accident (possibly the cause of his missing beak, as well as his other injuries) and tortures in order to dish out his pain on others.

It was shown in Dreams Go Wild that he had an abusive father (explaining his black eye and bruises) and was bullied at school. The origin of his missing beak is later revealed in Silent Tweets of Pain. 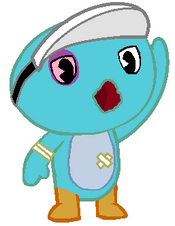 Retrieved from "https://happytreefanon.fandom.com/wiki/Tweets?oldid=380838"
Community content is available under CC-BY-SA unless otherwise noted.