Straight out of the hedge.

Playing By the Drools

Playing By the Drools

Twiggy is a HTFF character.

Twiggy is a brown-red hedgehog. As her name indicates, she has an abundance of twigs and leaves stuck in her hair, which tend to shed off whenever she moves.

Twiggy spends a lot of time outside and collects things such as clovers, pebbles, twigs and leaves and stores them in her hair. It isn't uncommon for small animals to take residence in her quills, usually when she curls herself up, resembling a nest. For these reasons, Twiggy's hair is often unkempt and filthy, but she does comb herself on certain occasions.

She is also a dog lover, despite being highly allergic. Her allergies send her into a sneezing fit that causes her quills (and any of its contents) to go flying. 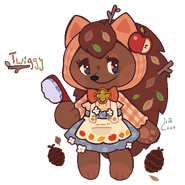