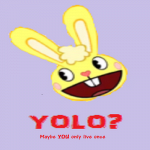 I am founder of a group known as Tiny But Mighty which is mainly based on https://www.fanfiction.net but it's a group of people that honestly believe that Lumpy is one of the smartest Tree Friends and Sniffles is the stupidest. The name is joking on the physical size of Lumpy's brain in some episodes. If, by chance, anyone reading this happens to share these beliefs and is interested, please leave a message on my wall saying so.

Note, this will be harder than Sniffles' above simply because it's harder to get pictures of intelligence in general than stupidity.

My Opinion Of Characters' Intelligence (or Lack Of) in Order

Retrieved from "https://happytreefanon.fandom.com/wiki/User:SaenihpNnylf?oldid=215616"
Community content is available under CC-BY-SA unless otherwise noted.