Vanilla is a fan character and the creator's 2nd self-insert

Vanilla is a light yellow with long, black hair and a red nose. She wears a dark blue hoodie with the hood down with a dark red pocket and tassels, and dark brown pants. She is stupid and easily confused, although is not as dumb as Lumpy. Despite being 13 years old, she acts mentally much younger, and some others mistake her being a little girl due to this. She does many childish things, such as drawing childish pictures with crayon, bouncing like Pinkie Pie, and singing obnoxiously. If she is confused, she will usually say, "...I don't get it" with a confused look. However, she is also very friendly and playful.

Vanilla is obviously stupid and easily confused. At the same time, she is also sweet, quirky, sassy, talkative, and energetic. She is overly-optimistic, almost never getting angry or sad. She is selfless and usually puts other's needs before her own. She is also outgoing and looking for adventure, fun, or things to do with her friends. Sometimes she can be risky like Cuddles and do dangerous things, but is not as risky as him. Her behavior can sometimes lead to her or other character's death. 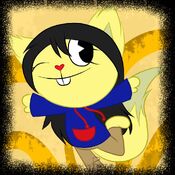 Retrieved from "https://happytreefanon.fandom.com/wiki/Vanilla?oldid=311371"
Community content is available under CC-BY-SA unless otherwise noted.