An Eye for Detail

Flaky is screaming, even though she is simply standing in line for a Ferris wheel ride with Cuddles. Handy and Petunia are seen for a moment as the two of them board the ride and Handy unsuccessfully lowers the safety bar, forcing Petunia to do it. The ride rotates and Cuddles happily drags Flaky to the empty bucket and pushes her in; She screams louder as the ride rotates once more.

Toothy is then shown, holding a massive stuffed toy which he crams into the next bucket. He hops on as well and is shown struggling to get the safety bar down all the way due to the size of the plush. Cuddles and Flaky's bucket soon goes higher up, where in the sky a fireworks display begins. Cuddles enjoys the show while Flaky goes hoarse from screaming.

Cut down to Mole who is in charge of the fireworks display. He taps a large wagon full of fireworks and unknowingly tips it over. Still, believing all is good, he sets them off and they begin launching towards the Ferris wheel. Many of the fireworks zip past the ride but one strikes Petunia head on and explodes, lighting her on fire. Handy tries to put the fire out, only to be annoyed by his lack of hands and attempt to blow the fire out; It does not work and instead spreads to him.

By now, everyone on the ride is freaking out, mainly Flaky who grips her safety bar even tighter in fear. A few fireworks whiz past the duo and one of them hits the side of a bucket with Lumpy and Mime in it. Mime, who is holding a balloon, freaks out and jumps, followed by Lumpy who does not have a balloon.

Mime miraculously floats gently down thanks to the balloon and smiles before Lumpy falls towards him. Several large fireworks, however, hit Lumpy before he can land on Mime and send him flying into the distance with a comical mushroom explosion. Mime sighs in relief, only for another firework to pop his balloon and send him falling into a cotton candy machine, which grinds him up.

More fireworks are seen blasting towards the Ferris wheel and one strikes the supports and bounces around before hitting the back of Toothy's bucket. The force tips the bucket and sends Toothy and his plush falling. Now the only two left, Cuddles urges Flaky to jump but she remains glued in place out of fear; This leaves Cuddles to jump on his own and he miraculously lands safely on Toothy's fallen plush (next to the beaver's splattered body). Of course he is then crushed by Flaky, who in turn is crushed by a dislodged bucket.

The episode ends with Mole handing Truffles some cotton candy, with one of Mime's antlers as the stick. 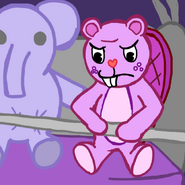 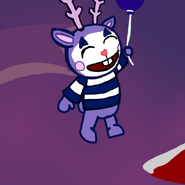 Add a photo to this gallery
Retrieved from "https://happytreefanon.fandom.com/wiki/What%27s_Fair_is_Ferris?oldid=368020"
Community content is available under CC-BY-SA unless otherwise noted.