Why HTF Has Been On Long Hiatuses - Part 1 is a Happy Tree Friends Flash-animated story created by Sleep Mast R. It aired on deviantART on March 22, 2018.

In this story, Ginger learns that Cub has a sleeping sickness, and tries to consult everyone and get it solved.

The story starts out with Ginger walking into Cub's room, and finding Cub sleeping in his bed. Ginger then gets temporarily shy about the situation. He decides it is a good idea to tell everyone else in the house to stay quiet. After descending the stairs, he walks across Jordan K, Hovee and Bigtail sitting on a green couch and watching a TV show, and then comes across Fiona and her student, Jamie Kaplan, prepared for a cooking lesson. Ginger tells them to stay quiet, to which Fiona sadly replies that she will have to defer the planned lesson of popcorn (because the popping of popcorn is noisy).

Pop then shows up, telling Fiona and Jamie that deferring the lesson is needless because Cub can sleep through any levels of noise. He explains that a month ago, Cub slept through Dr. Moon vacuuming the entire house. Then he remained fast asleep during a noisy midnight dance party (even though it kept Giggles awake). Then when morning came, he slept on, and continued to sleep for five straight days. That last part shocks Ginger strongly, and makes him react. Pop then notices the fact that he has never seen Cub awake since the dance party. At this point, Jordan K, Hovee and Bigtail are seen facing the TV screen with it turned off.

The scene then cuts to Smalltail sitting on Cub's bed and asking to play with him. Cub continues to sleep, completely oblivious, making Smalltail feel lonely.

The next scene shows the front of the couch with the Kaplan boys, revealing Joshua and Jessica to be sitting on the floor. Ginger asks the boys if they have ever seen Cub awake. However, they ramble instead of discussing the matter seriously. Hovee tells Ginger that when they were facing the TV screen with it turned off, they were all sleeping on the sofa with the recliner open. Bigtail then points out that Jamie did not sleep with them because she was busy cooking something. Then, Jordan K lies that Joshua and Jessica are still sleeping.

When Ginger walks up to see the babies awake, they close their eyes and claim to be asleep again, and then they rip all of the tails off Jordan K, Hovee and Bigtail and make them into a bed: Jessica takes Bigtail's tail and jumps on it once making it a mattress; then she reshapes one of Jordan K's tails into a pillow, drops it on one side of the mattress and lies down. Joshua then takes another one of Jordan K's tails and makes it into another pillow, then drops it on the other side of the mattress; then he tosses Hovee's tail in the air with his foot before lying down, so that it lands on the two babies as a blanket. Finally, Joshua's foot sneaks out of the blanket and grabs Jordan K's third tail, which is then seen as a teddy bear. Both babies have their eyes closed throughout the process.

A few moments after Ginger walks by them and states that the slumber is evidently pretend, the babies end up actually sleeping in the bed made out of the tails. Ginger does not feel like he should be mad at them for their cleverness, so he just leaves them.

Smalltail is then seen sitting on the couch alone. (It is assumed that Jordan K, Hovee and Bigtail stormed out of the living room after their tails were ripped off.) With more loneliness upon seeing Joshua and Jessica sleeping, Smalltail bursts into tears.

The scene then cuts to Jasmine at Cub's bed, violently shaking his body up and down. She angrily demands that he wake up, and at one point grabs his head and sits him upright. However, Cub simply flops back down and continues to sleep, infuriating her.

Jamie then walks by the living room with a full bucket of popcorn from Fiona's lesson, expecting to see Jordan K, Hovee and Bigtail watching TV. She is surprised to see that they are gone.

Ginger is then seen outside the house. He walks by some of HTF's official characters (namely, Cuddles, Giggles, Toothy, Lumpy, Petunia, Handy, Nutty and Mime). He asks if any of them has seen Cub awake in the last month, and they all answer no. Lumpy and Nutty immediately proceed to annoy Ginger by showing their most recent encounters with Cub in a slideshow:

At this point, Ginger demands that they stop showing the slideshow because it is scaring him. Cuddles then discusses the matter seriously and says that Cub has an unknown sleeping sickness. Handy suggests that Cub may be hibernating because he is a bear, but Giggles points out that it is late spring and very close to summer. Cuddles tells Ginger that the two of them can walk to Cub's room together to think more about the issue, so they do. They walk across Jamie seated on the green couch with the popcorn beside it.

When they arrive at Cub's room, Cub is on his back atop the bed, without his beanie, and Dr. Moon using her stethoscope on his chest. She says that his heartbeat is completely normal for a sleeping baby and that the sleeping disease is unfamiliar to her. She asks Cuddles and Ginger when they last saw Cub awake, and they respond that they gave him blocks but had to go so they didn't witness what happened. Cuddles suggests that she ask everyone else the same question because they may have better ideas.

In the final scene, Jordan K and Hovee's parents tell them that they are proud of them for "giving up their tails to make the babies a bed." The parents are unaware that the babies actually stole the tails without permission, and Jordan K is too mad to clarify that. Hovee reassures him that their tails will grow back soon. In the background, Jamie is seen going to sleep on the couch (presumably because she missed out on the family siesta and got tired).

The screen fades out to "TO BE CONTINUED..." with an animation loop of Smalltail continuing to cry.

The bear who is always sleeping.

A dedicated student ready for a lesson on popcorn.

A family nap in the living room. 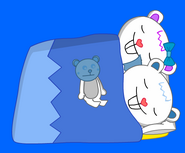 An unpleasant deed resulted in a pleasant bed.

If this actually happened, it would have been a treat for Nutty. (Get it?)
Add a photo to this gallery

Retrieved from "https://happytreefanon.fandom.com/wiki/Why_HTF_Has_Been_On_Long_Hiatuses_-_Part_1?oldid=368602"
Community content is available under CC-BY-SA unless otherwise noted.