Wintry is a fan character.

Wintry is a light blue woodpecker with a darker blue eyeshadow on her eyelids, dark red cheeks, orange beak, white markings on her belly and the tip of her wings, and dark blue feet. She wears a dark blue scarf. She likes to put on some make-up, only for it to be ruined later. She has a motherly personality, and thus she is very kind and caring to others.

Like Burr, she likes the winter time. To her, at such season, she can play around and build unique shapes from the snow. However, she is never aware of the snowstorm, mistaking it as a better rain of snow. This, of course, can cause her deaths.

Her habit of putting her make up can be sometimes criticized by other characters, but she will never change her habit no matter what.

If an episode does not take place during winter, Wintry is always seen trying to collect anything related to winter and keep them in her house. Sometimes, she can be seen playing with other characters who share the same interest as her.

Wintry in a wallpaper.

Wintry and Toothy make a snowman

Wintry hits someone, but it has no effect. 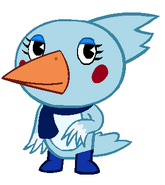 Add a photo to this gallery
Retrieved from "https://happytreefanon.fandom.com/wiki/Wintry?oldid=376417"
Community content is available under CC-BY-SA unless otherwise noted.