Follow what's she said when you become her slave.

Ringing Off the Cook

Frilly (Within a Wheelchair)

Yuna is an orange red panda who wanted anyone to treat her like a princess. She have a long orange hair with purple barrette and a ponytail. She often seen with her paper fan or oil-paper umbrella.

Yuna is actually self-centered and a bit arrogant, but can be friendly and calm person sometime. She proclaimed herself as a princess and wanted anyone around her to treat her like it. She can be very bossy and pushy because of this. She acts some people around her are her slaves and demands things from them most of the time.

She acts herself is more important than some people she sees(likely sees them as peasants) and doesn't care about them most of the time(she does care, rarely). She also disgusted by something gore and wanted keep herself away from it. She can be easily challenged by others who proclaim themselves as the royal and important one. 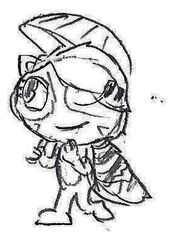